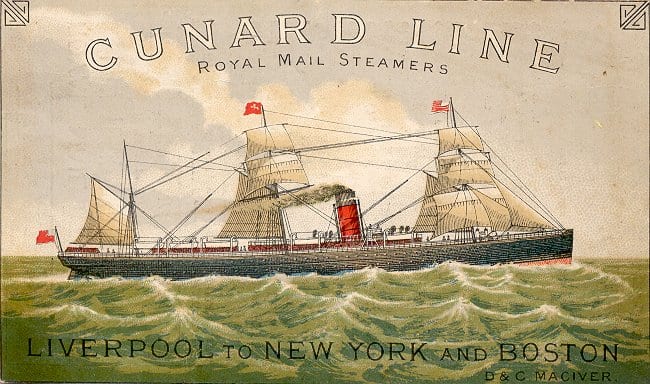 Alma Kjellander was on her way to immigrate to the US from Sweden. This is the second and last part of her story. Read the first part here.

Alma had departed from Gothenburg, Sweden at 1 pm on Friday 11 October 1895. With her was her brother Oscar Lönnqvist, Sven Åsberg and Betty Andersson. Roughly one day later they landed in Hull, England. The steamship Romeo reached Hull between Sunday at 3 pm 13 October 1895, and Monday at 3 pm 14 October 1895 [1]. Add one extra hour to the travel time due to the time difference.

The ship Romeo belonged to the Wilson Line (Thomas Wilson Sons & Co.) and carried third class passengers. One of three compartments onboard was for single women like Alma Kjellander. A full description of a journey between Gothenburg and Hull in 1882 is available at norwayheritage.com. From Hull, Alma and her friend traveled by train to Liverpool.

The first leg of the journey to North America was the same for many Swedish emigrants. All companies sailing via England used the Wilson Line from Gothenburg to Hull. This is mentioned in the guidebook Amerikaboken (The America Book) by K. Zilliacus, 1893. The stretch by Hull and Liverpool had the shortest journey at sea. It came to the price of staying for a few days in ports abroad. The journey from Germany or Denmark (Thingvalla Line) had fewer stops, but meant more days on the ship. The Danish line had the added advantage of a Scandinavian speaking crew.

The cost for crossing the Atlantic was the same regardless of the company. They often advertised the journey only with their fastest vessels. Amerikaboken warned migrants to get the name of the ship written on their ticket.

The next ship for our travelers was nearly 2.5 times larger than the first. SS Bothnia had room for up to 1,400 passengers [2][3]. They departured from Liverpool for Boston on Thursday 17 October 1895 [4]. It was four of five days after Alma Kjellander and her friends had arrived in England.

On the passenger list from Liverpool, Alma Kjellander is listed as a spinster at the age 26. So is her companion Betty Andersson. Sven Åsberg is on the list as a laborer at age 18. Alma’s brother Oscar Lönnqvist is under the name Osk. Linquist, a 29 year old laborer. This highlights a problem with the passenger lists when Swedes went abroad: the risk that names were misspelled.

What could a Swedish immigrant expect onboard the transatlantic ships? The guidebook Utvandrarens tolk (The emigrant’s interpreter) describes the conditions in detail. My copy is the fith edition printed in 1882, but it was first published in 1869 [5]. It concludes that the journey was not as dangerous as commonly thought. The insurance cost was only 1.5 to 2 percent. Storms, discomfort, and seasickness were inevitable. But the storms were only dangerous near the coasts. The book provides remedies for many different stomach related ailments. This is probably not a coincidence. It was encouraged to have a wash with seawater on deck as often as possible and to have a daily foot-bath.

The ships were cramped, the food was rough, and every meal would make you miss the indulgences only available on land. The recommendation was to accept the conditions. The six to eight weeks, in the case of traveling on a sailing ship, would soon be over.

Travelers to the northern states needed warm clothes. Wool cloth, shoes, and socks for personal use was good too bring. But money was more useful than merchandise, preferably in the form of bills of exchange. Money and other articles of value could be left with the captain. It was advised to be careful with baptism certificates and other identifying documents. It was also important to avoid conflicts and follow directions from the crew. You can read more about the accommodations onboard at norwayheritage.com.

Amerikaboken, from 1893, is more concise on the conditions onboard. Migrants were advised to bring not only bowls, cutlery, and blankets. They would also appreciate having some of the salty food to which they were accustomed. The book concludes that there was not much more to add about the journey. “…because for the two aliments that torment the emigrant: homesickness and seasickness, no cure is given.”

Arriving in the US

Alma Kjellander and her friends sailed across the ocean for ten days. SS Bothnia arrived in Boston on Sunday 27 October 1895 [6]. The passenger list in Boston is quite detailed and interesting. First a few minor discrepancies: Oscar Lönnqvist is written as Oskar Linqvist. The home address for Betty Andersson and Sven Åsberg is Gothenburg. I have not followed them enough to know which address is correct. The records are clear enough to conclude that they are Alma’s companions.

None of the four had been in prison or supported by charity, were polygamists, or under contract to labor in the US. Oscar Lönnqvist brought more than $70. Alma Kjellander and Betty Andersson each had what looks like $19. Sven Åsberg had $12. Betty was the only one who had been in the US before, in Manchester in 1895. She was going to stay with her sister S Ceder. The whole group had the destination address 135 Orange Street, Manchester, New Hampshire.

The other passengers on the first ship from Sweden were going to places like New York, Chicago, and Boston [7] . The guidebook Amerikaboken actually advises against immigrating to New Hampshire. The salaries were good, but the state was so small that an influx of migrants would bring them down. The conditions for farmers were mediocre. But as evident by the passenger list in Boston, Alma and her friends had a contact in Manchester.

Alma Kjellander returned to Sweden after a few years. Eventually she came back to Manchester and settled down for good.